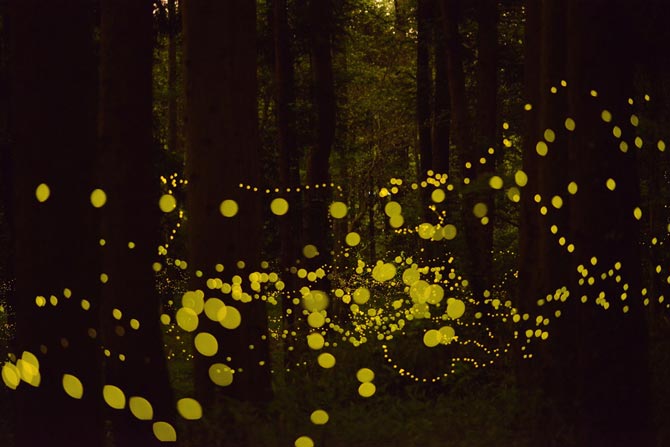 Tsuneaki Hiramatsu is a 35-year-old amateur photographer who lives in Okayama, Japan. He discovered about a decade ago a forest close to home which, once a year, is populated by a multitude of fireflies. Between 2008 and 2011, he will take pictures of them each year on two different sites: on one side of the photographs of fireflies named Genji Botaru – photographed near a river – to Okayama in the Hokubo domain, and on the other Hime Botaru fireflies – found in the woods near Niimi town and towards the famous sanctuary of Tennoohachiman.

In order to obtain these images, Tsuneaki Hiramatsu uses an already known method – the reinterpretation of which is clearly marked by poetry – which he openly admits to have borrowed from other photographers offering tutorials on their site. It regulates its apparatus in long exposure, this produces the luminous traces, and takes many clichés. Some of his photos are also composites of different images taken on the spot and then mounted on photoshop, multiplying the points of light in order to increase the spectacular effect.

His photographs, first posted on his blog, were quickly seen by thousands of visitors and then relayed by many media, including some sites reaching millions of people a month. Very surprised by its rapid success, Hiramatsu was offered a partnership for an exhibition with the American Museum of History.

His images set a very specific time of the rainy season after the storms in June and July of each year, bringing out a world that is at once peaceful and strange, stimulating the imagination and accentuating the magic of Japanese forests.