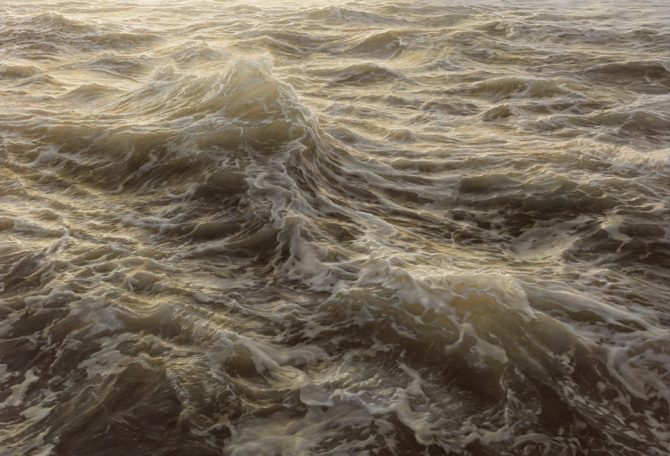 The painter Ran Ortner, who was born in 1959 in San Francisco, is driven by rhythm, movement and the sensory system. The former professional motorbike racer and die-hard surfer developed a personal technique with a penchant for minimalism from 1990 onwards. He found the ideal language to express his relationship to the ocean in painting. He developed a rapport between the physical pictorial movement and the sensitivity of technique. What is most striking in Ran Ortner’s production is the ultra-realism of his work. Like in photography, he captures the moment. But his paintings go beyond that, they reveal their wealth in the palette and accumulation of layers on the canvas. According to the angle, colours are revealed, the immensity seizes the viewer and the waves seem to come to life. Then come the taste of salty water and the sound of the waves. With his gigantic productions, Ran Ortner tries to upset and immerse the viewer in a fragment he caught… For the artist, the ocean is an entity both as devastating and brutal as luminous and delicate, between fulfilment and distress. It is the rhythm of his body, of his heartbeat, of his breath. Ran Ortner’s paintings have a hypnotic power that send us back to the vastness of the ocean and the intimate relationship we each have to it.