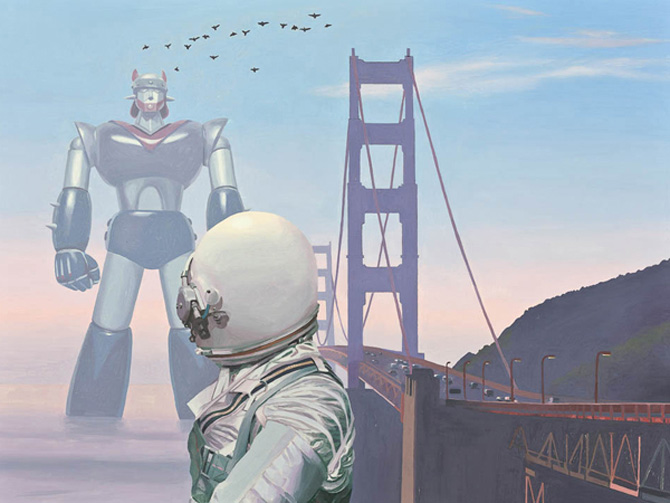 Astronauts and Dinosaurs by Scott Lisfield

Scott Lisfield is an artist born in 1976 who lives and works in the United States. In his own words, he paints astronauts and sometimes dinosaurs. This surrealistic artist has a passion for science fiction and understood the problems of his time and seems to take a cunning pleasure in combining the codes of American popular culture with his vision of a future pop and softly melancholy.

Since 1999 Scott Listfield has been touring his astronaut of the future in his colorful canvases as a solitary and silent explorer who carries an amused or concerned look at the present. The artist develops in his paintings a simple thought, the present is an unusual and often even more strange place when it concerns the things that we thought acquired. Working mainly in oil, it is all the codes of popular culture that are found in the artist’s works: logos, big advertising signs, architectures, pop icons, and so on. According to Listfield, astronauts not only explore space, they also reveal the strangeness of our own environment.

Scott Listfield’s images have been published in the pages of Wired Magazine, the Boston Globe, or Surface Magazine and will be exhibited in 2015 in Rotofungi, Chicago.

The work of the artist is present in the Portfolio pages of Cercle Magazine n ° 2 – Science-fiction.