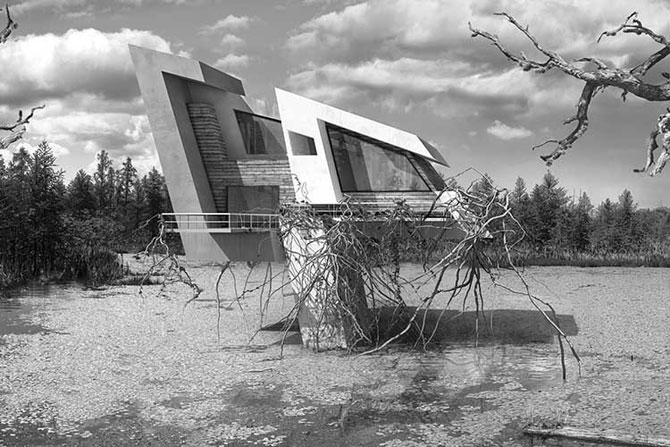 Dionisio González is a photographer born in 1965 in Gijon, Spain. He studied art and photography in Spain and England. His global work, which questions architecture and its relation to societies, proposes a reinterpretation of social models through a futuristic, deconstructed, chaotic and almost parasitic architecture. He is trying to envisage a radical reconstruction of the habitat which would improve the living conditions of its inhabitants. In his latest series Inter-acciones, the artist, through image retouching, reconstructs traditional houses in futuristic and strange habitats. The black and white visuals question our relationship to the habitat and push the future possibilities to the absurd. Dionisio González is a lecturer at the Academy of Fine Arts in Seville. Throughout his career he has received numerous awards and prizes such as the Pilar Juncosa & Sotheby Award or the European Photography Arendt Awards in 2013. His work has been exhibited in various institutions and museums in Chicago, Madrid, Sao Paulo, Toronto. Her work is represented in important collections such as the ING Art Collection in Amsterdam, the National Center for Arts and Culture at the Pompidou Center and the Margulies Collection in Miami. In 2013, he exhibited in the USA, Luxembourg, Korea and Spain, solo or in group.