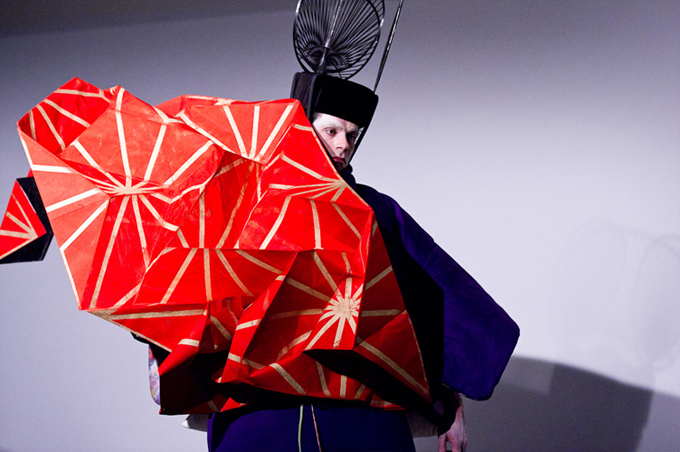 Gwen van den Eijnde was born in 1981 in the Netherlands but is developing an international career. After his studies in the textile department of the Arts Décoratifs school in Strasbourg, he continued his education in New York, then became a resident artist in Stuttgart and Warsaw. He currently teaches at the prestigious Rhode Island School of Design. Hybrid creator, he blurs the line between fashion and costume design.

His work transforms the model into a timeless creature, baroque and futuristic all at once. Sorts of moving sculptures, his achievements are technical and elaborate. Eijnde draws inspiration elsewhere than in fashion, especially in cinema with, among others, the universe of Peter Greenaway.

Cercle Magazine was able to ask a few questions to Gwen van den Eijnde about his work and creative process.

Circle Magazine: Your work takes on different fields. For example, your creations recall the theater or cinema; your inspirations come from, among others, the universe of Peter Greenaway. What other artists outside of the world of fashion influence your work?
Gwen van den Eijnde: Many artists! My interests include the work of Jan Fabre, Berlinde of Bruyckere, Robyn Orlin, Robert Wilson. Having extensively studied the work of Peter Greenaway in particular, I almost consider him as one of my teachers. Greenaway is obviously not a fashion designer but a director who has received training as a painter and whose deeply theatrical imagination thrives on baroque painting.

Do you see a boundary between fashion and costume design?
No, I do not think that creativity can be confined into a specific box. I admire Leon Bakst who was a painter, costume designer and stage designer whose work has influenced Paul Poiret who in turn influenced Christian Berard who himself influenced Yves Saint Laurent, etc … It’s the story of a trans-generational and trans-disciplinary inspiration.

But costumes contain a narrative potential much stronger than that of fashion. Always being the instrument of a staging, the suit says many things using symbolic representation codes. A costume’s space is an imaginary space, virtual, sometimes anachronistic. Fashion, on another hand, is real and I find that it has lost much of its game, its creativity and imagination in daily life.

Your work oscillates shifts fashion and performance. Do you consider yourself a fashion designer or an artist first?
Why not an artist designer? This was the case for designers such as Jacques Doucet, Paul Poiret, Sonia Delaunay. There was no talk of “multi-disciplinary” at the time. Today everyone talks about the talent of Alexander McQueen. Who is interested in the history of the talented Jacques Doucet and Paul Poiret?

To reach your first question, if you wanted to define my practice, it would probably lean more towards that of the director and the artistic director as to that of the fashion designer. For the costumes I use deploy an entire universe: dreamlike, quirky, baroque. Inanimate costumes installed on a mannequin or a hanger don’t really interest me if they don’t express their dramatic potential.

That’s why I started doing performances, because it was the fairest way to make my costumes, set them in motion and in a context.
I then traveled and worked in Germany, Poland, Switzerland and the United States, where my work is appreciated and supported.

You have worked quite a lot for dancing field. What is you relationship with this art form?
I’m getting more and more interested in dance and body work. In the summer, I will follow a baroque dance workshop given by Ken Pierce in Boston.
I greatly respect the work of Robyn Orlin. Her creative process is based on dialogue and collaboration. Her method is not one of a choreographer who dictates what to dance so that we applaud the performance of the body that performs the feat of the movement.

There is a certain “trend” in contemporary dance costume, which is to dress the dancers’ bodies very little, leaving them almost naked. This way you can see the performance of the dancing body by getting a contemporary look, minimal, erotic and inexpensive without the costume “telling” too much.
My work follows a different logic, one of the movement being given by the suit, transforming the body into a sculpture. This is to follow the movements dictated by wearing the suit, to fit the body transformed by the scale and volume, learn to move in a certain way by wearing clothes that are neither jeans or t-shirts.
That is why I am very interested in Oskar Schlemmer’s research in his Triadic Ballet.

What are your current projects?
This summer we are finishing the mounting of a short film entitled Lipizzano with the German director Marcel Wehn. The movie was shot in June at the Wenkenhof Villa in Basel and the central character is a horse.
The soundtrack will be composed by the Korean composer Jae-Ho Youn. The film will be online on my website in September and then I will try to propose it to festivals.
Then for the next two years, I will carry out research work in the “RISD Museum” Costume & Textiles collections: http: //risdmuseum.org/art_design/collections/costume_and_textiles.

This research will feed both my teaching at RISD as well as my projects. I plan to design a set of contemporary pieces in dialogue with old items. These pieces will be shown / staged during a new performance, probably in the United States.

Can you describe your work in three words?
Poetic
Magical
Baroque