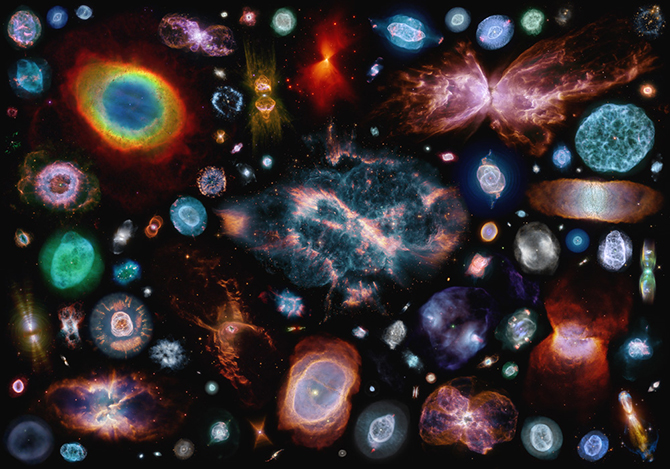 Judy Schmidt, better known on the web under the pseudonym Geckzilla (a nickname amalgam of Gecko, the little lizard, and Godzilla) is American and equally keen on art and astronomy. She manages to combine her two passions by reworking the colors of images taken by the famous Hubble telescope. Its Hubble processing series is the result of thousands of data reported by Hubble only known to the scientific community. Originally, these images were reserved for research, without any artistic purpose. Judy Schmidt then decides, according to a long process, to collect and collect these data in order to extract all the visual qualities. 100 planetary nebula, the best-known visual, was launched in 2006 on the sixteenth anniversary of the creation of the famous telescope, in which the team decided to make public a mosaic of photographs produced by the machine. However, Judy Schmidt points out that it is not affiliated with NASA or the Hubble Legacy Archive. She develops her process as an amateur fascinated by astronomy. The work of assembling the artist makes it possible to discover the fascinating beauty of the constellations, nebulae and galaxies that surround us.