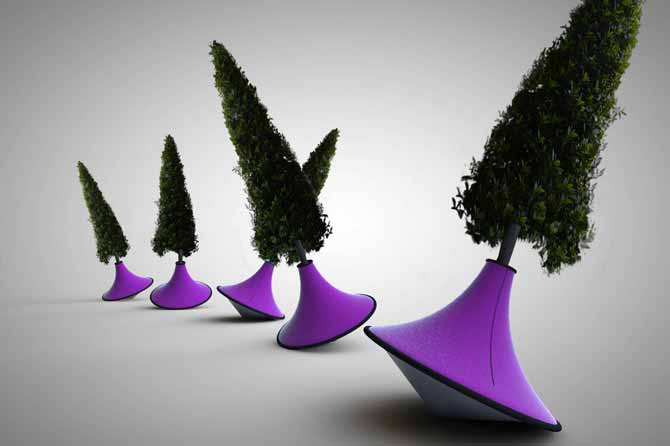 Alexis Tricoire became a designer after training as an environmental designer at Olivier de Serre, a furniture designer at the Arts Décoratifs in Paris, and a year at the Art Institute in Chicago. In 2006, Patrick Blanc offers him an exhibition – Folie Végétale – in the Electra space: it is a question of putting in scene botanical practices observed in the nature. Following the success of the exhibition, the projects follow Alexis Tricoire.

The work of the designer is between art and object design, and develops a great environmental sensitivity. From his artistic installations and his sculptures, he extracts the elements that seem to him to be conducive to serial development. This was the case in particular with the Green Pillow and la bulle Babylon , which were first created in artistic installations and subsequently developed into small functional objects intended for mass production.

La forêt ivre was presented at the Jardin Jardin event on 30 May 2013 at the Tuileries in Paris. This theme, already touched upon by Alexis Tricoire during an exhibition at the Château de Versailles in 2010 in the French Garden of the Petit Trianon, has been updated with a new version of these metal editing tops And lycra fabric. It is a playful and dynamic installation that provokes a visual disorder, and distorts the classical perspectives of the gardener Le Nôtre, whose 400 years since its disappearance has been celebrated.

An interview with Alexis Tricoire is also published in the paper version of the first issue of Cercle Magazine on the Design pages.