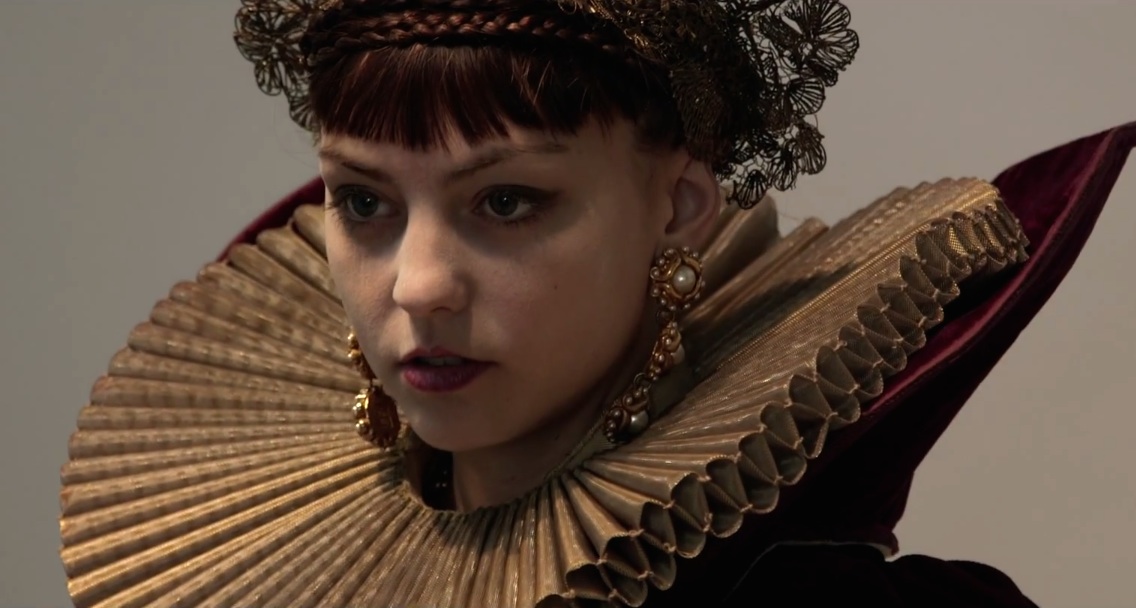 American indie-folk idol, Angel Olsen is one of those singers whose voice makes you surrender. Far from the feminine folk cliché of sentimental banter, Angel is a wild one, grungy but vulnerable, dark but beaming. The last track of the revealing album Burn Your fire for No Witness (Jagjaguwar, 2014)_, “Windows” was made into a clip by Nick Alverson. Angel Olsen gave him free rein and played along wearing period costumes. Ethereal and obsessive, the elegiac song becomes an epiphany on screen.

Like an apparition, Angel strides along the countryside and haunts two children as they play in the fields and inside the house. The gaze she lays on them is tainted by the past. From another era, as a ghost amongst the living, she lets her face be covered in a gloopy substance making a see-through mask. She slips into a second apparition. Angel Olsen appears in dazzling clothes and solar hairdo. From the Italian Haute Renaissance, straight out of a Rafael or Veronese, adorned with a ruff and noble fabrics, gold and jewels, she now embodies the exuberance of Venetian nobility and Elizabethan spirit. In a magnificent full-length portrait, the profane angel slivering in Vaseline near the fields in summer now drips with ornaments like autumnal leaves. Displaced, idealised, mythicized, Angel stands like a Cranach queen, a woodland creature, of sombre impassivity, surviving nature in a (sur)real universe.

An ancestral manifestation in contact with childhood and nature, she is the other ghost who’s come to look upon the future. “Won’t you open a window sometime?” repeats Angel Olsen like an elegy, a song for the dead opening the windows of time. Maybe she is more Shakespearian than grungy?